Posts, that were tagged with “ice” 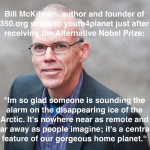 Ice is white – no? The Black Ice Story 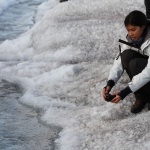 We are here with Prof Jason Box who has been monitoring changes on the Greenland icesheet to try and tell people what’s happening in this remote but important location. Yesterday we took a helicopter ride to Kiagtût Sermiat Glacier which was really cool where Jason Box is recording how fast this glacier is melting. I noticed all this black…

Finally arriving at Nasarssuaq, we noticed how the bay is completely packed with icebergs from the fjords. The locals mentioned that they never had so many icebergs during this time of year in the last few decades. As we were crossing the bay to reach our hostel, the Lief Kensington hostel, we passed a few giant icebergs along the way. The…