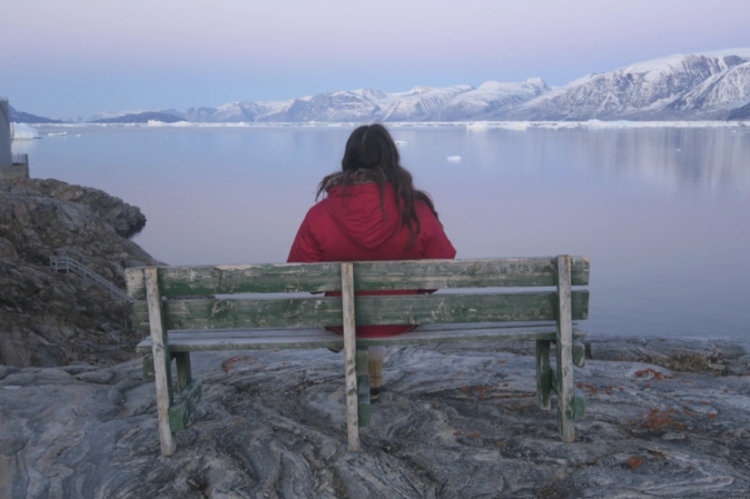 Here I am, Kalinda Palmer, possibly the first Australian Aboriginal to reflect in North Greenland, where the peaceful and inevitable landscape encourages one to do so. For the last four months I have watched and felt the Arctic landscape change and transform. Everyday now the surrounding glaziers spit out new icebergs for the ocean to swallow, while the beloved sun and warm weather brings life to the people and animals. Here, the landscape seems untouchable, mountains too high to climb, and oceans to cold to step foot in. Physical limitations highlight that this landscape is not for us to conquer or control but rather for us to observe and appreciate from a distance. Unfortunately this is not the case; Greenland has been touched forcefully by the impact of industrial production. The climate is rapidly changing, initiating a chain of present environmental and cultural consequences that are seen and felt today. So I quickly ask myself why? Why have we let this happen? Why are we living in a world confronted with nature? And who am I to care about this land so far from my own? In search to answer my questions I want to share with you the cultural collision I have observed between the Indigenous of Australia and the Arctic during my time in North, West and South Greenland. 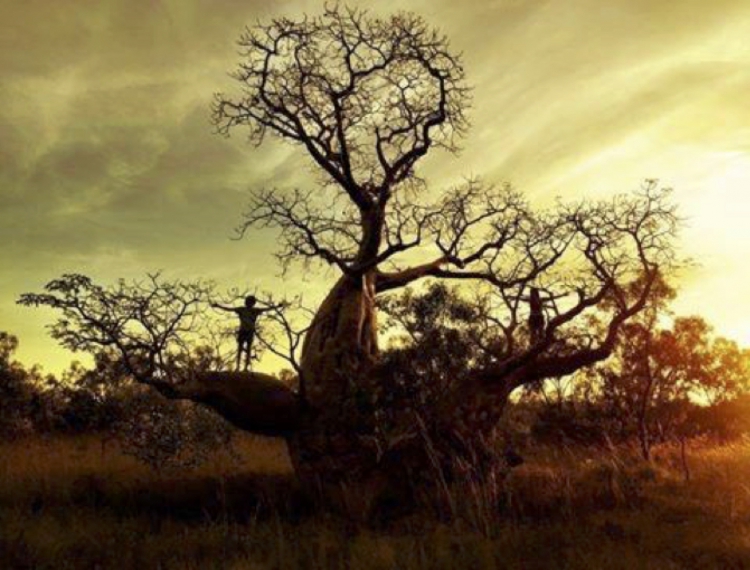 Growing up in the Kimberly, Western Australia, I often heard the phase

“Mother nature”, although the phrase is not traditionally articulated I learnt that the concept of respecting and caring for our country is. The land is seen as our parent, someone who nurtures and shares with us. During my time in Greenland I do not heard the words “Mother nature”, rather I hear “Sassuma Arnaa” whom is the mother of the sea. Both cultures express their morals and ideas through story telling, aboriginal culture has many stories related to the ´the dreamtime´ which are stories exploring the spiritual creation and evolution of mankind and the natural world. In Greenland similar stories highlight the relationships with the human world and the spiritual world. I have carried the story of Sassuma Arnaa with me since arriving in Greenland for the first time last September with Youth4Arctic. The mother of the sea is one of the most central sprits in the Greenlandic Inuit culture, she inhabits the bottom of the ocean, watching and judging the human world. When individuals disrespect nature by killing without care or reason the woman is defiled by impurity; her hair becomes tangled around the sea animals capturing and withdrawing them from the surface. Hunters are confronted with the consequences of their communities’ actions as food becomes scarred. In order to free the animals the most powerful shaman must enter her realm and clean her hair. This then releases the animals, allowing hunters to continuing pursuing, although this time with respect and mindfulness towards their actions to ensure their communities survival.

The morals and values embedded within the story reminded me of the intentions behind totemistic practices. Our elders give us our totems when we are young, they watch us play in the rivers and bush lands and observe us grow among our families and friends. I became aware of the responsibility, rules and consequences regarding totemism when I was nine years old as I was given the fresh water turtle and the black-headed python; it is forbidden for an individual to hurt, kill or eat the given totem. If they do it is believed that their bodies will bleed and they will become sick. Instead of killing and hunting this animal we are told to protect and appreciate its existence. Not only did this practiced teach me to respect and to value the life of animals, it strengthened my sense of individually, teaching me self-love and pride. Through spirituality we avoided having such an extended division between animals and humans. Instead of placing mankind in a superior light, we take pride in our totems, associating the characteristics, strengths and weaknesses that the animals displays in representation with our own identities. 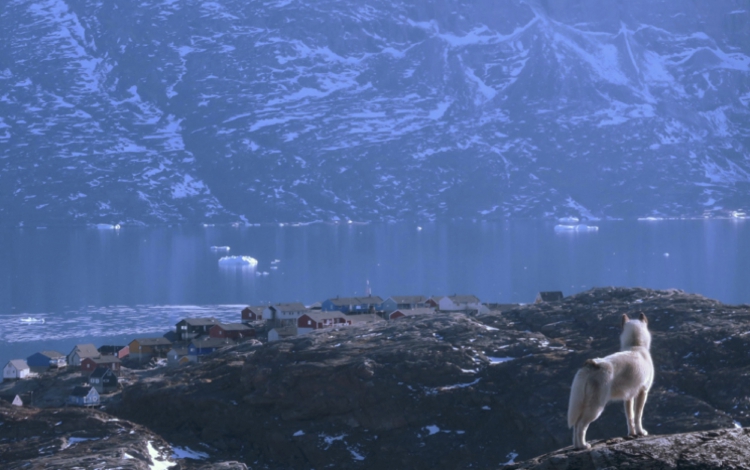 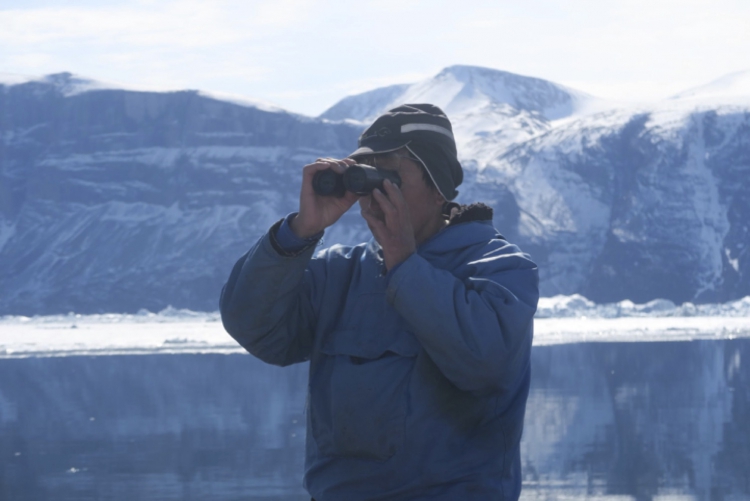 Comparable to how Aboriginal people see the land, the Inuit’s perceive the ocean as their provider. The story and practices voices the idea that people have to take care and look after the natural world by ensuring that spiritual relationships are maintained. Within these values responsibility, survival and balance are the main theme. The Inuit people feared that food would be limited due to their own actions similar to how the aboriginal people fear that illness would occur if they do not protect their totem. Both cultures understood that their interactions and use of the land would have present and future consequences. In order to avoid those consequences a conscious policy of conservation was embedded through their everyday practices. 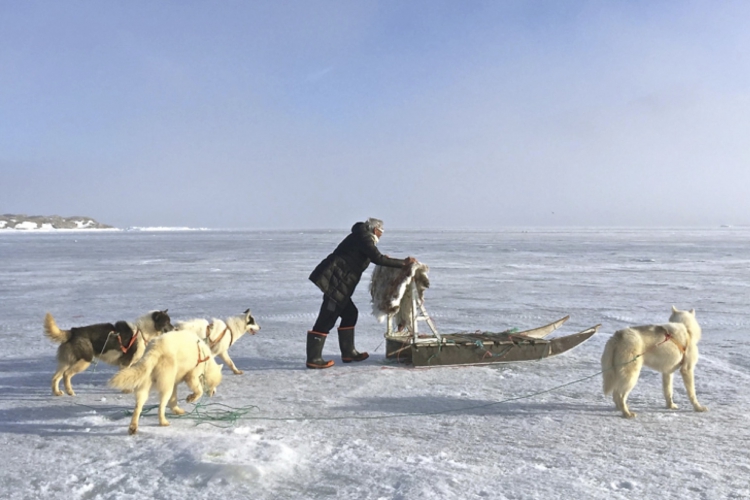 Uunartoq, One of the last old hunters in the North

Today both cultures are combined with the modern and western world. Advantages and disadvantages of colonization are found almost everywhere including the way people appear to look. Many Greenlandic people have bright blue eyes derived from the Danish while numerous Australian aboriginal people have light brown skin. Those with light skin where once called ´half cast´ although this word is now culturally inappropriate the term of being a ´mix´ is a phrase Greenlandic and aboriginal people are more rapidly taking pride of, not because the idea of being ´western’ is more desirable but because we are shaping a new world, one that combines tradition, modernization and unity. 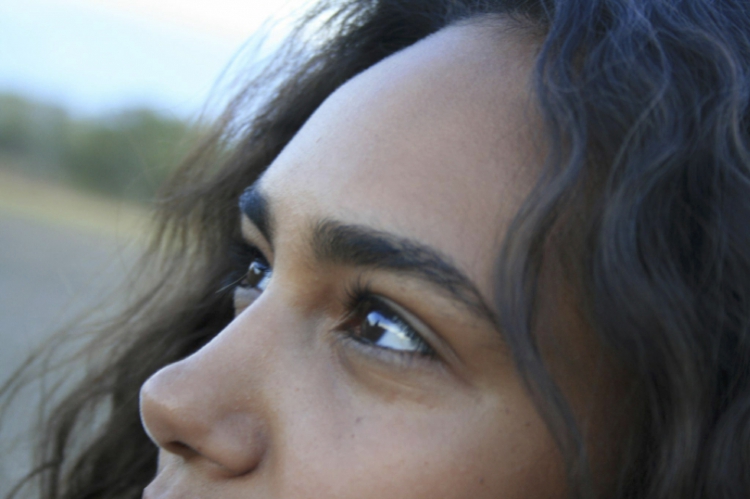 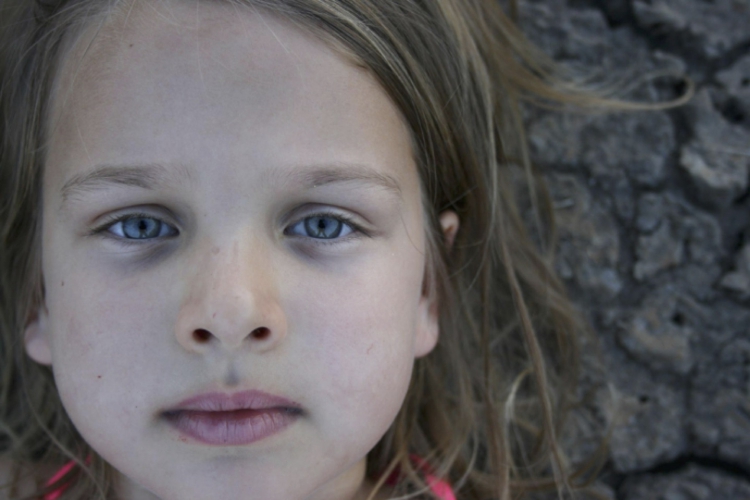 Girls from the Kimberly, they are born into tribes and given bush names

Although I am so far from home the appearance of being a mixture of indigenous and western has allowed me to fit in. I cannot resist smiling when people approach me speaking their language. Despite the landscape being completely opposite from the surroundings I grew up in, I have found a strong sense of belonging amongst the people here. Many of the conversations I have had with them include exchanging the knowledge and stories of our cultures. Together we have compared our language, hunting methods, and environmental issues. The similarities inspired me to paint two Greenlandic girls with red soil naturally found in South Greenland. In the Kimberly’s red soil covers the land the same way the ice covers Greenland. We call this soil ‘Pindan´. Painting our bodies with colorful mud was used in dancing ceremonies and rituals.

Red soil collected from Qassiarsuk mixed with water from the river

Nowadays paint is mainly used when dancing for festivals intended on educating tourist. The designs I have used on the two Greenlandic girls are not traditional patterns but rather the action of applying mud on the body, as art is. The photos highlight the strength and knowledge that I have gained while being in Greenland exchanging cultures. While spending time with the two Greenlandic women I noticed how much strength they gain from their culture and county. It is not a coincidence that they too have so much respect and care towards nature. Being surrounded with people who truly admire and feel connected towards their land and oceans makes it hard to imagine why other people don’t feel responsible or passionate towards the natural world. My conclusion to why or how is that people have allowed themselves to ignore the relationship that mankind and nature can share together. I am aware that a more commonly desirable life of power, wealth and material competes against the notion of being respectful, mindful and connected with the land.

Feeling connected to a particular animal or landscape can allow us to feel compassion and love. It is these strong emotions that inspire and motive myself and other to want to make a change in the way the modern world currently interacts with the natural environment. Understanding that my culture and many others live and lived with nature in a sustainable and respectful manner gives me hope that we can one day reconstruct our methods. Without this connection and relationship the morals are lost and replaced with greed, feeding an economic world that overlooks the simple values of conservation that the indigenous once amplified therefore resulting in a world where resources are exploited, animals are driven to extinction and indigenous cultures are forced to fade. 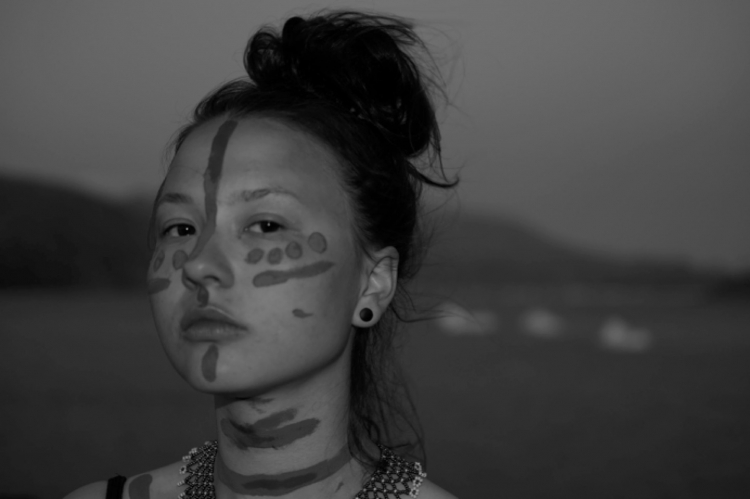 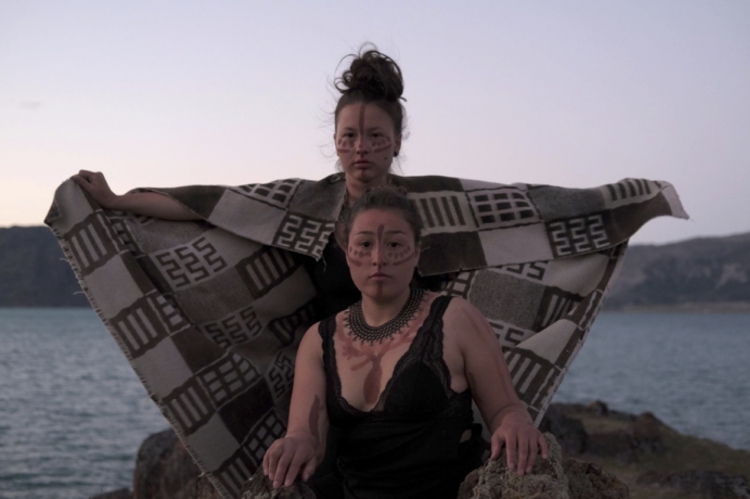 A large population of the world have forgotten and/or never known what it is like to appreciate the natural beauty and peace that can be found amongst forests, glaziers and desserts. Appreciating the beauty of this world is one step closer to understanding that we truly do need the natural world to survive, nearly the same way our ancestors needed trees to produce oxygen, plants to be used as medicine and animals to be eaten. 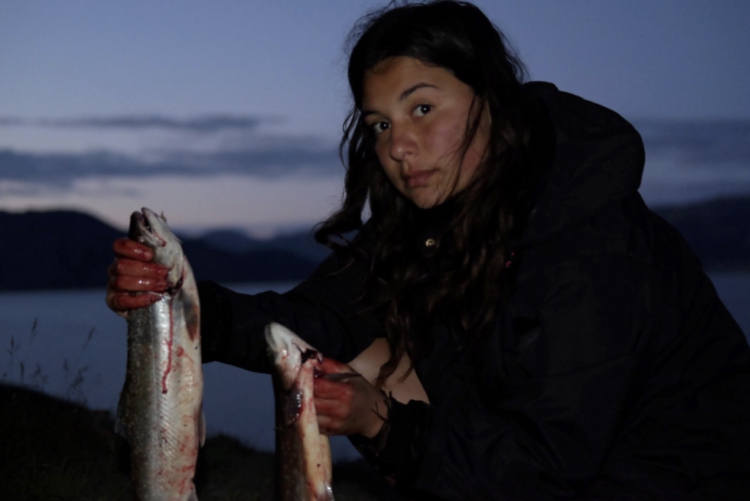 Experiencing the intimacy of catching, killing, preparing and eating the animal I will eat. The trout where caught the traditional way; by using nothing but my hands. 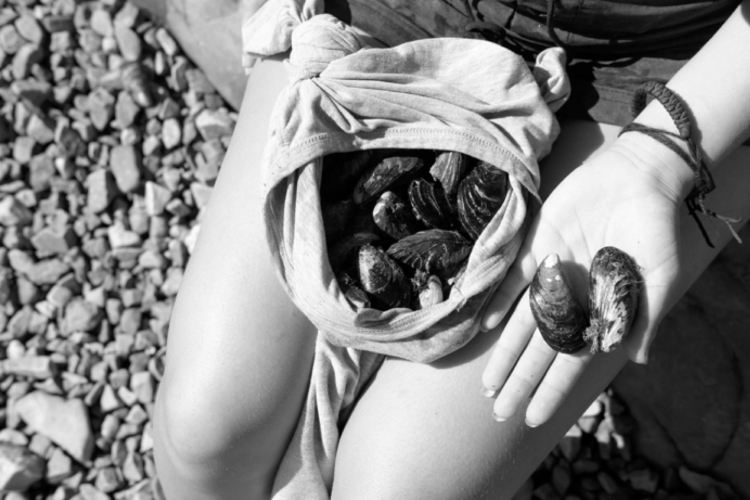 Mussels collected during low tide, while collecting the shells it is important not to disturb the smaller mussels, as they are slow growing 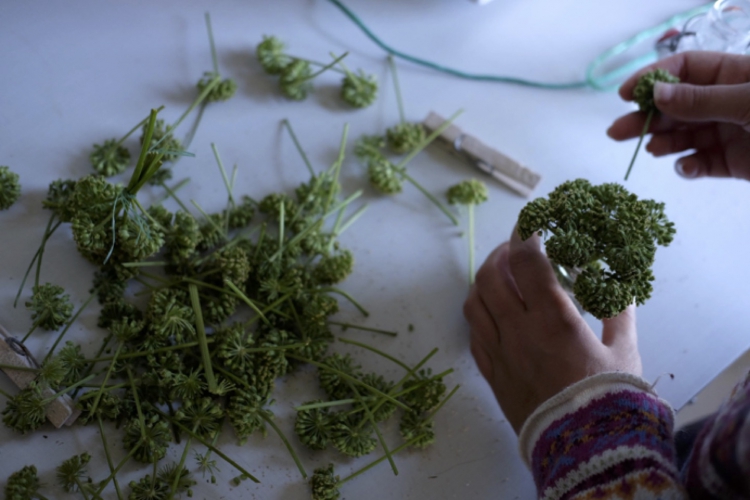 To listen to the wisdom of our ancient cultures, may be far from the instincts of the modern industrialized man but rather then replicating the wisdom we can allow ourselves to be inspired. You do not have to be Aboriginal or Inuit to withhold these ethics. As my Western father showed me, anybody is capable of respecting and cherishing the environment no matter where they come from. Applying this inspiration may lead to a world that combines culture, economics and environment equally.

That leaves me with my final question, why do I care about a land so far from my own? Exploring the similarities between the two cultures has led me to believe that the vast Arctic is also my land and that the Inuit people are also my family, the reason being is because we truly are all indigenous to this planet.

Earth is our home, and our mother. We should nurture her, the same way she nurtures us. 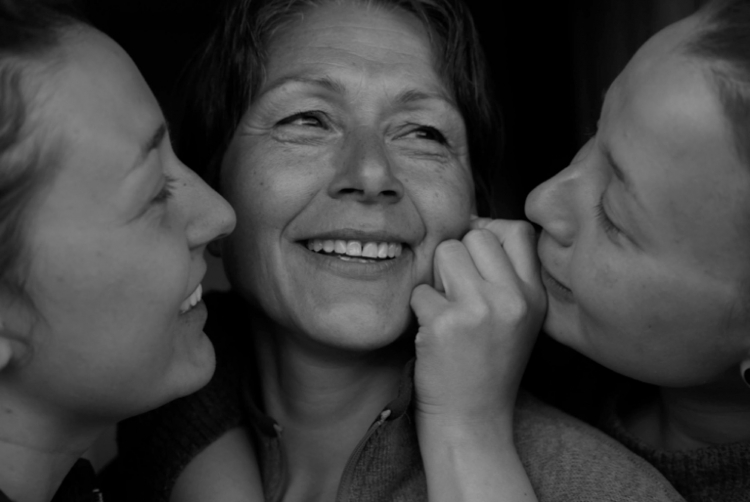 Malu and Nivi admiring their mother

Special thanks to, Aim for the stars foundation, Youth4planet, AIME and Canon Australia.

3 Comments on “Indigenous sustainability – What can the Indigenous of the Arctic and Australia teach the modern world?”

An inspiring young woman from a beautiful Kimberley family! She does her family and Australia proud. May many more young indigenous and non indigenous people be inspired by her.

Thank you Jan, for taking your time to read the article and of course for your kind words. I have a smile on my face ?

inspirational, I live and work on Anangu country as a guide, love to here of young indigenous holding onto their culture and country, well done Kalinda, doing your country proud, well written!